The Trenz Electronic TEC0330 FPGA board is a PCI Express form factor card (PCIe 2.0 or higher) integrating the Xilinx Virtex-7 XC7VX330T FPGA chip. This high-end FPGA card is designed for maximum system performance and intended for use in applications with high demands on system throughput. There is a SO-DIMM socket on the board for standard DDR3 SDRAM extension memory module.

The TEC0330 FPGA board is intended to be used as add-on card in a PCIe 2.0 or higher capable host systems, it can not be used as a stand-alone device.

Additional assembly options are available for cost or performance optimization upon request. 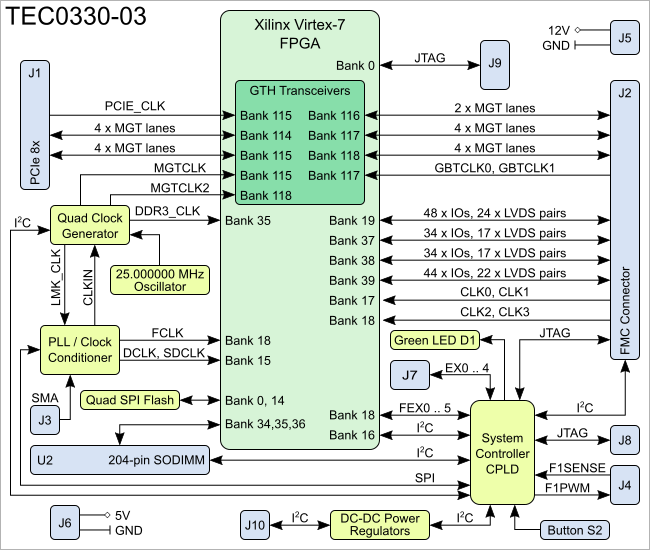 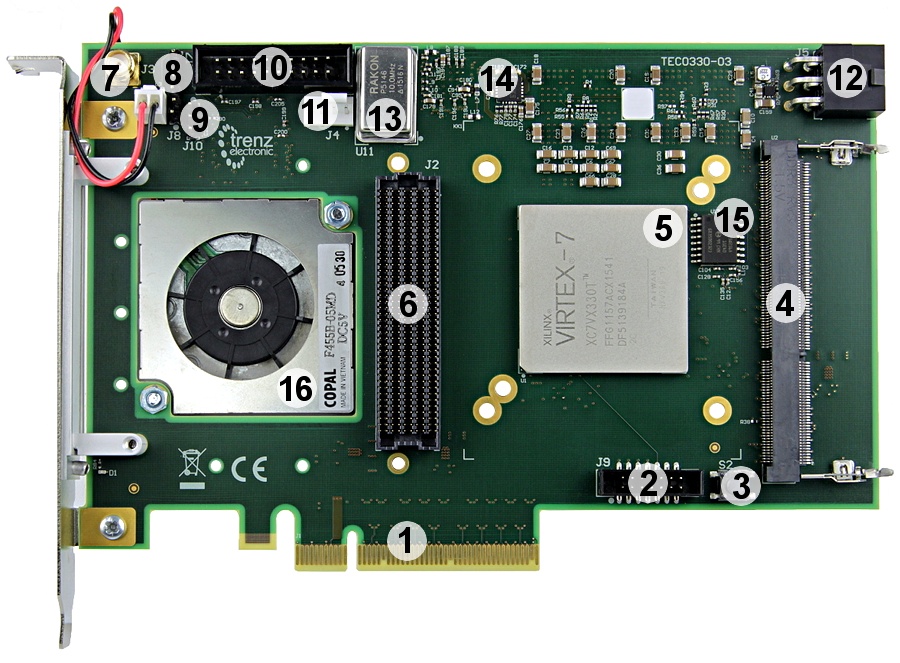 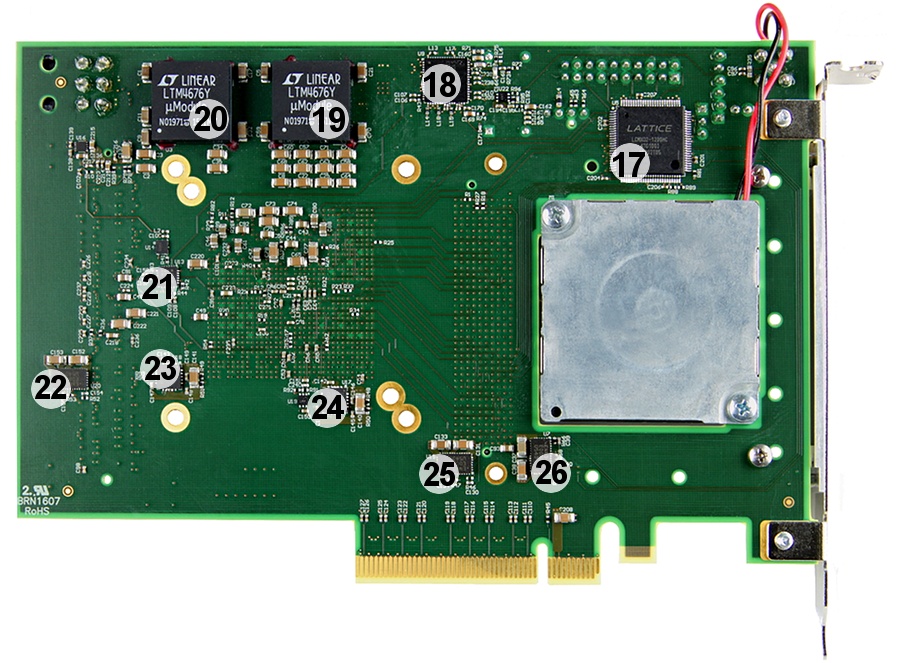 The I/O signals are routed from the FPGA I/O banks to the FMC connector as LVDS pairs:

Table 2: Overview of the FPGA I/O bank signals routed to the FMC.

Several VCCIO voltages are available on the FMC connector for FPGA I/O banks:

The TEC0330 FPGA board is a PCI Express card designed to fit into systems with PCI Express x8 slots (PCIe 2.0 or higher) and is PCIe Gen. 2 capable. See next section for the overview of FPGA MGT lanes routed to the PCIe interface.

There are three JTAG interfaces available on the TEC0330 board:

Other tasks of the System Controller CPLD are the monitoring of the power-on sequence, the proper programing of the FPGA module and to display its programming state.

Following table describes the interfaces and functionalities of the System Controller CPLD not described elsewhere in this TRM:

The reference clock signal for the DDR3 interface is generated by the quad programmable clock generator U13 and is applied to the FPGA bank 35.

There is also a I2C interface between the System Controller CPLD and the DDR3 SDRAM memory:

An 256 Mbit (32 MByte) Quad SPI Flash Memory (Micron N25Q256A, U12) is provided for FPGA configuration file storage. After configuration process completes the remaining free memory can be used for application data storage. All four SPI data lines are connected to the FPGA allowing x1, x2 or x4 data bus widths to be used. The maximum data transfer rate depends on the bus width and clock frequency. The memory can be accessed indirectly by the FPGA JTAG port (J9) by implementing the functional logic for this purpose inside the FPGA.

The TEC0330 FPGA board has a sophisticated clock generation and conditioning system to meet the requirements of the Xilinx Virtex-7 GTH units with data transmission rates up to 13.1 Gb/s.

List of on-board and external reference clock signals of the TE0330 board:

The TEC0330 board utilizes an ultra low jitter clock synthesizer TI LMK04828B (U9) for conditioning and generating clean clock signals which are necessary for the GTH units of the Xilinx Virtex-7 FPGA module.

The clock synthesizer can be controlled and programmed by its SPI interface (SPI slave) and other control lines, which are routed to the FPGA module (SPI master) and by-passed trough the System Controller CPLD. See section 'System Controller CPLD' for more detailed information.

Logic needs to be generated inside the FPGA module to utilize SPI bus correctly.

6-pin 12V power connector J5 is the main power supply of the TEC0330 FPGA board, minimum current capability of 3A for system startup is recommended.

TBD  - To Be Determined.

The on-board voltages of the TEC0330 FPGA board are powered up in predefined sequence after the external voltages 12V on connector J5 and 3V3PCI on connector J1 become available.

Core voltages and main supply voltages have to reach stable state and their "Power Good" signals have to be asserted before other voltages like PL bank's I/O voltages can be powered up.

Following diagram describes the sequence of enabling the on-board voltages: 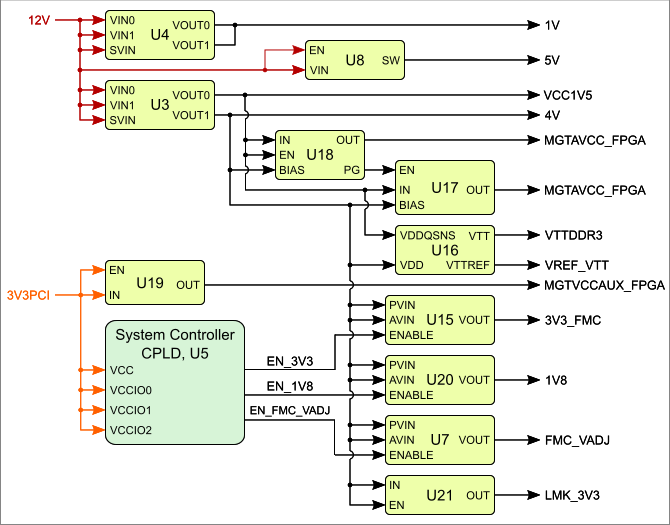 Table 20: Power rails and corresponding connectors of the FPGA board.

All dimensions are given in millimeters. 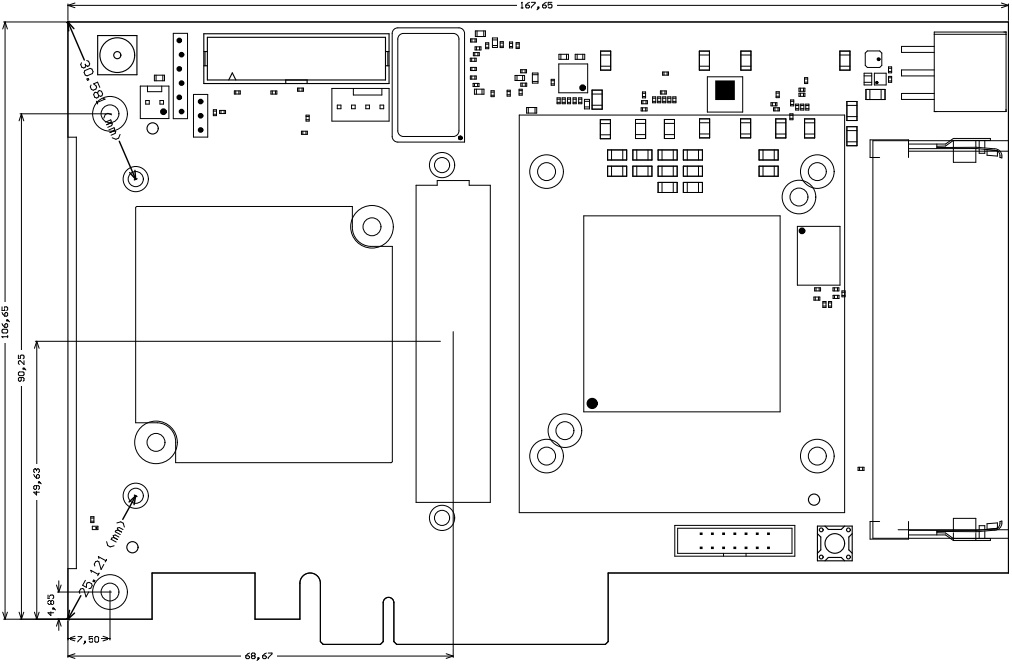 Hardware revision number is printed on the PCB board together with the model number separated by the dash.