Litex is an alternative and open-source development enviroment for FPGA designs written in Python. It offers Migen, a python like Hardware Description Language.

For every board supported there is a demo within the Litex installation.

Description of the demo

The demo for the TEI009 / C10LP RefKit development board consists of a design, describing a RISC-V processor so that it can run C code to display a BIOS promt via UART (115200 / 8N1) , furthermore is makes the LEDs D13 to D17 blink.
The demo is non persistent and is delete by a power down or a board reset (Switch S2) . Also a soft reset is available (Switch S7) .

Intel Quartus Prime Lite:
Download and install it. If necessary, add device support for Cyclone 10 LP. The device support can be installed via download of the file from Intel's webpage and running the program Device Installer.

Litex setup-script:
The script can be sourced at the projects git web page:  https://github.com/enjoy-digital/litex.git as part of the sources.

RISC-V Toolcain:
This can easily be installed via the Litex setup script.

Make:
Included as part of the NIOS2 package within the Intel Quartus Lite installation.

Path variables point the litex scripts to the necessary executables for running various tasks. They need to be present before running a script. In windows they can be edited and stored permanently or non permanently.

This manual edits the path variable non permanently, the changes made effect only the CMD console in which they are made and will be lost by closing the console.

Make a folder for your litex-installation. It is highly recommand to use an installation-folder inside your user directory.

Open a CMD console and browse to this directory and run the installation command for Litex:
python llitex_setup.py init install   -   All CMD console commands are in italic letters.

This downloades and installs Litex along the necessary Python modules into the installation directory.

Installation of a RISC-V toolchain

Edit the path variables via copying these commands.

Error handling:
In case of the already existing path variable leading to errors during the build, one can override the PATH variable completely. The following command should be executed, which overrides the PATH variable temporarily and adds Python to it.
set PATH=c:\<Path to your python installation folder>
Issue the path commands above for Intel Quartus Prime Lite, RISC-V Toolcain and Make.

To generate the demo, navigate to the folder
C:\users\<your litex installtion folder>\litex-boards\litex_boards\targets
and execute the build command with the --build option:
python c10lprefkit.py --build

These starts the build beginning with the software compilation followed by the hardware design generation. 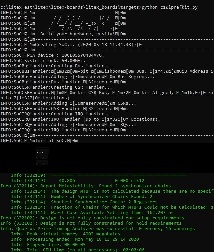 The build can end with an error message which is of no concern to the successful generation of the file.

Program that file to the board and the demo runs.

Options:
To generate only the FPGA design, containing the RISC-V processor and blinking LEDs, without the software part, the Litex UART BIOS promt.
python c10lprefkit.py --no-compile-software