Hardware components/boards delivered in EDDP Kit are not intended to be used in final products. All software and hardware parts of the EDDP are intended for developers evaluating Motor Control Applications with Xilinx FPGA and/or SoC devices.

Requirements for the Functional Test

The purpose of the Functional Test is to verify the functionality of the hardware by using the default firmware supplied.

Following items are required in addition to the EDDP Kit:

Requirements for the Development

Requirements for the development with SDSoC:

Requirements for the development with HLS:

Micro-SD is delivered without Linux images to avoid any issues related to US export control regulations.

When delivered as full EDDP Kit several components are pre-assembled. 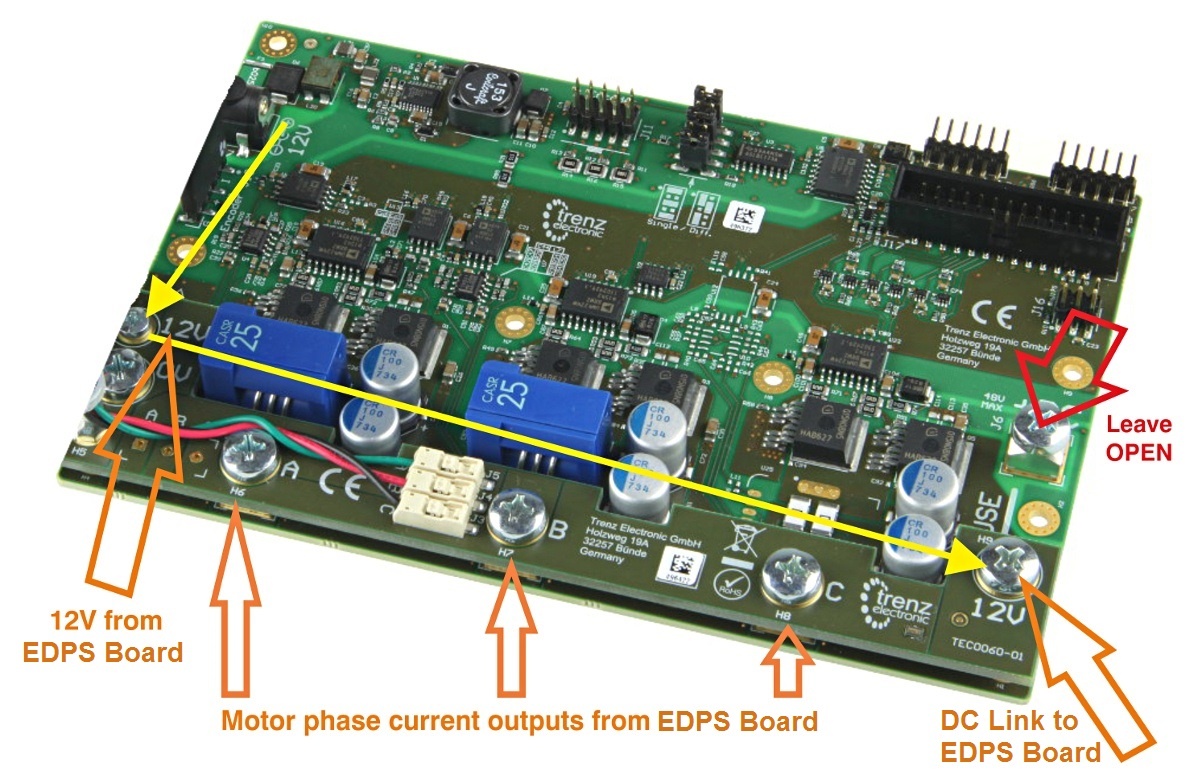 Figure 1: Top view of the EDPS Board with the Adapter Board mounted.

The Adapter Board is mounted to the EDPS Board using 5 x M6 screws (Labels 0V, A, B, C, 12V on Adapter Board) and with M3 screws and spacer - marked 12V at the left. This Adapter Board "forwards" (the yellow arrow) the EDPS Board pre-driver supply (12V) to the DC Link main terminal on the EDPS board, so that separate DC Link power supply is not needed allowing easy evaluation of the complete system.

Note terminal marked+DC must be left open when using the Adapter Board! 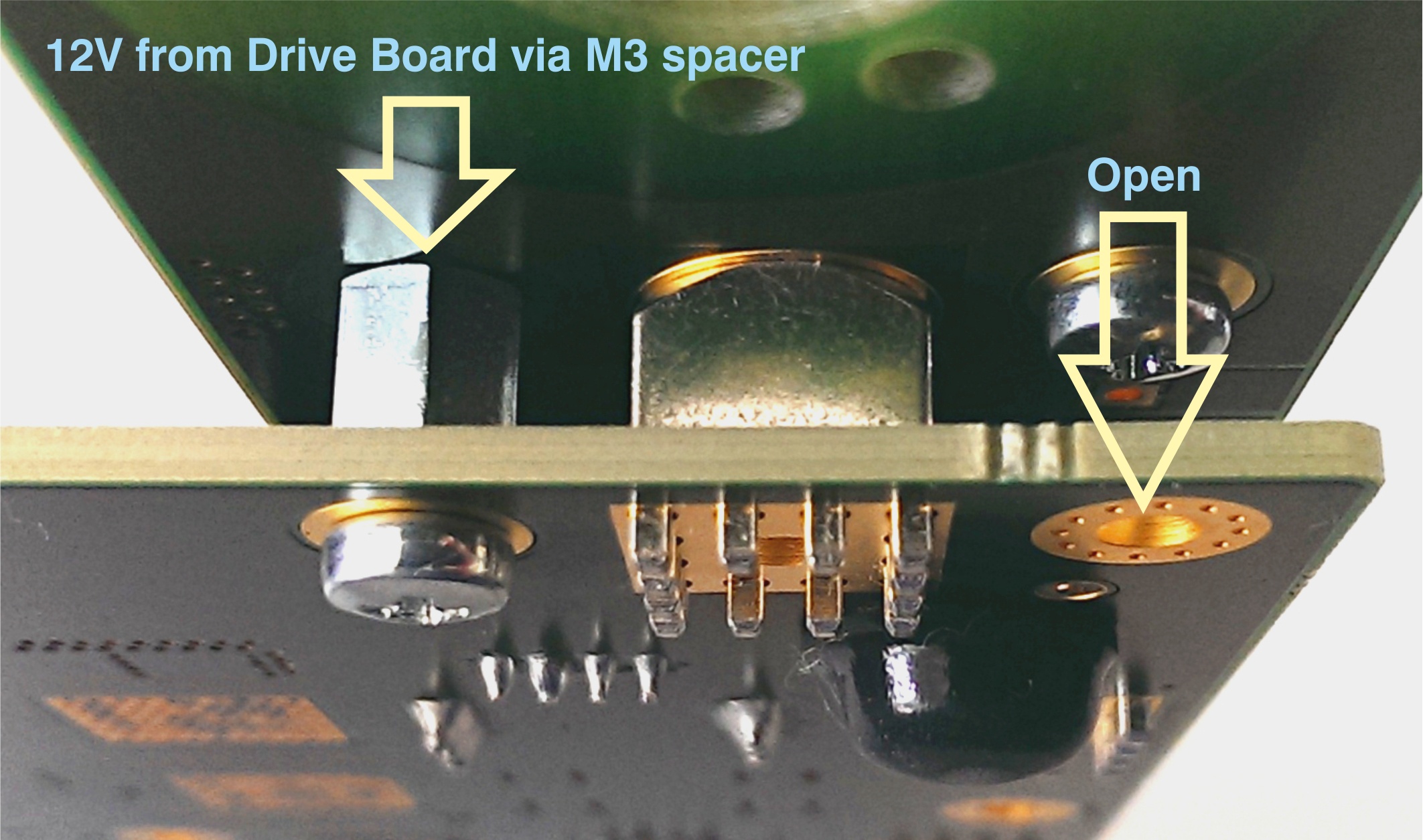 Figure 2: M3 spacer and two M3 screws connect 12V from the EDPS board to the Adapter Board.

In the EDDP Kit the Reference Motor stator wires for all three phases are already connected to the Adapter Board. Instructions for manual assembly below: 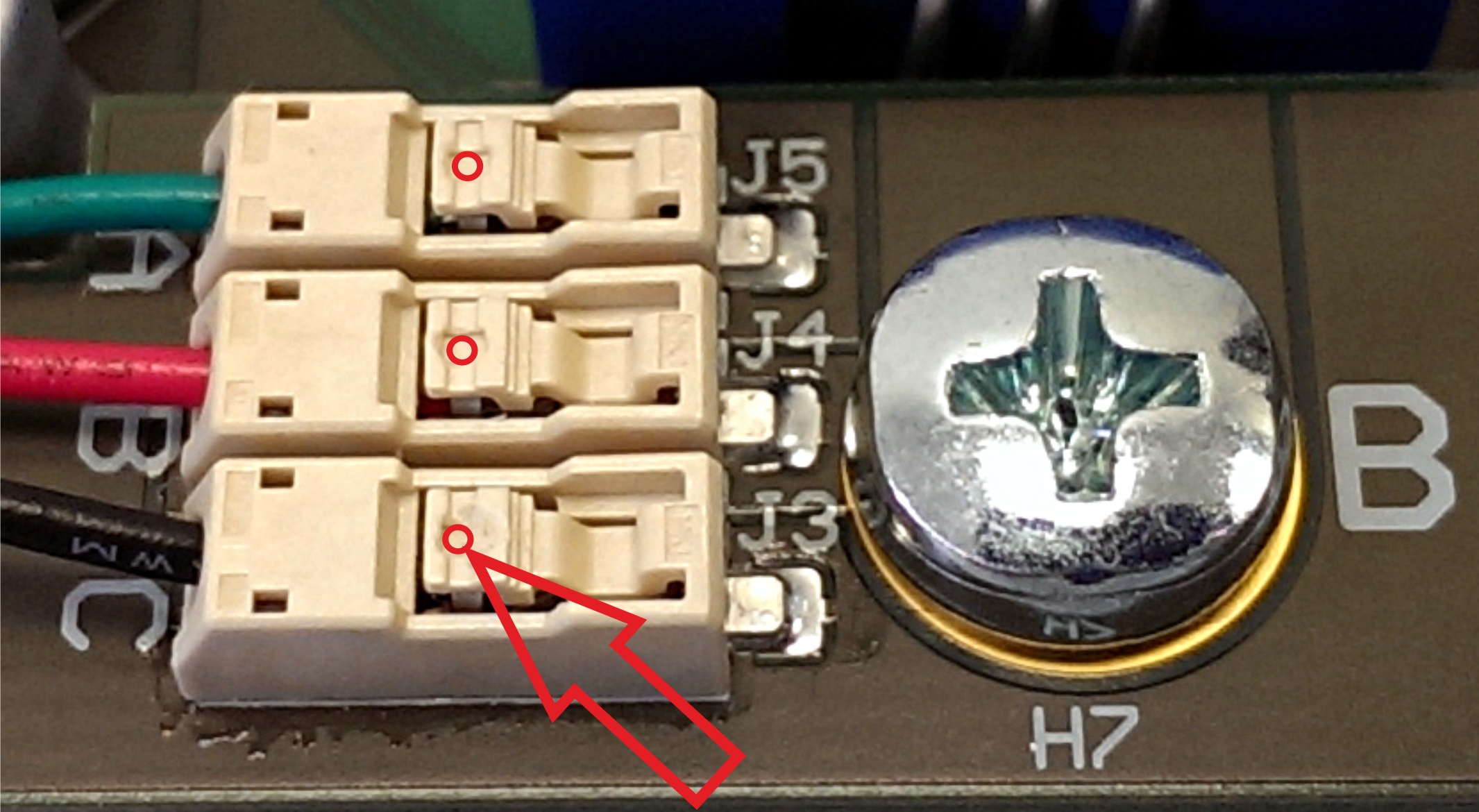 Figure 3: Red dots and arrow mark the place where wire terminal can be released for insertion or removal.

Use a ball-point pen or similar tool to apply gentle force at the dot to release the wires. Do not try to remove the wires by simply pulling them out without releasing them first! Do not apply force in any other region of the white plastic except as marked, because it is easy to damage the plastic.

One 6-pin Pmod cable is included with the EDDP Kit. It is already assembled between the encoder and the EDPS Board. Instructions for manual assembly are below: 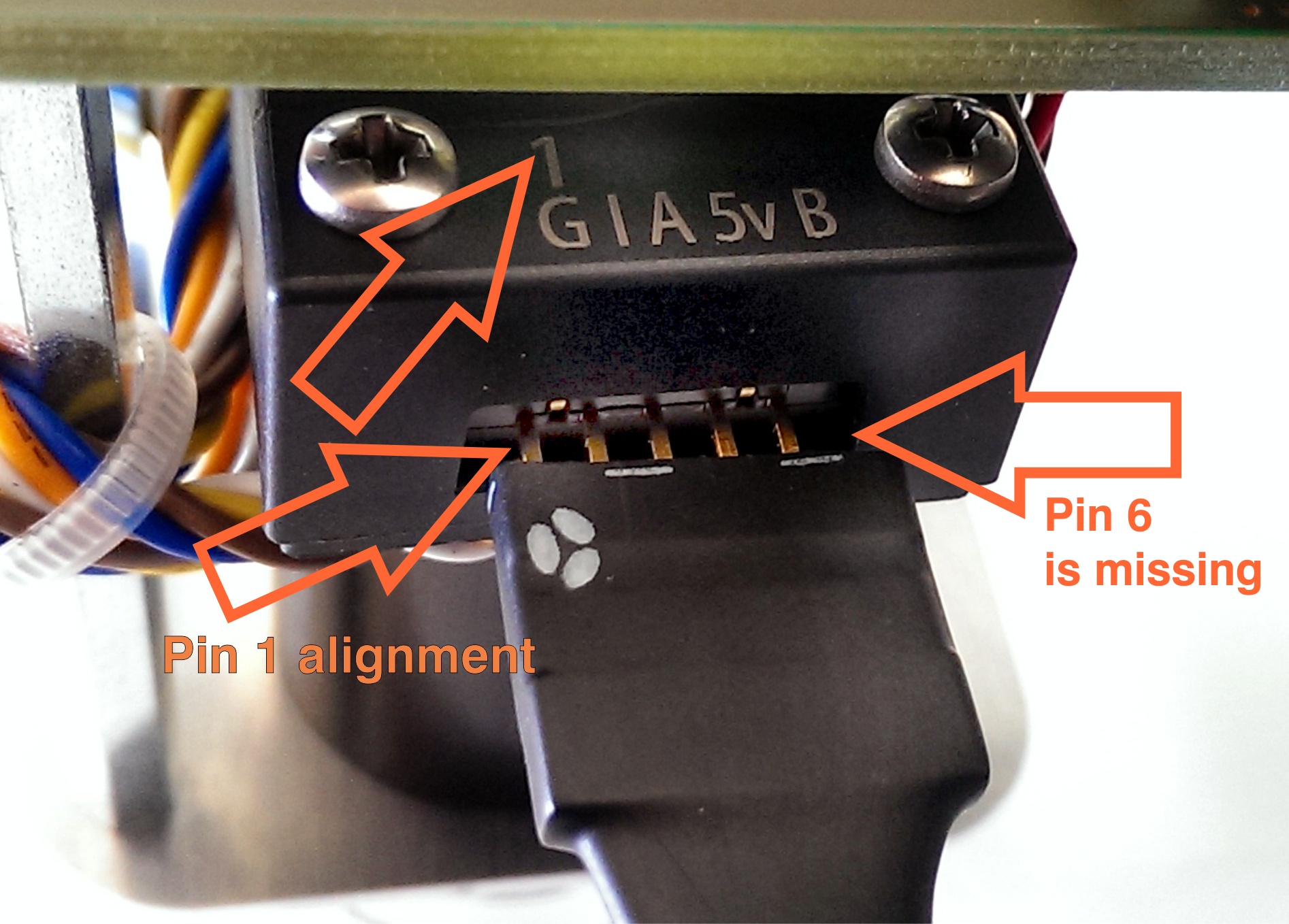 Notice that there are 5 pins in the Encoder header while the PMoD female connector has 6 terminals. Red Arrow marks the "empty" terminal at the PMoD Cable. 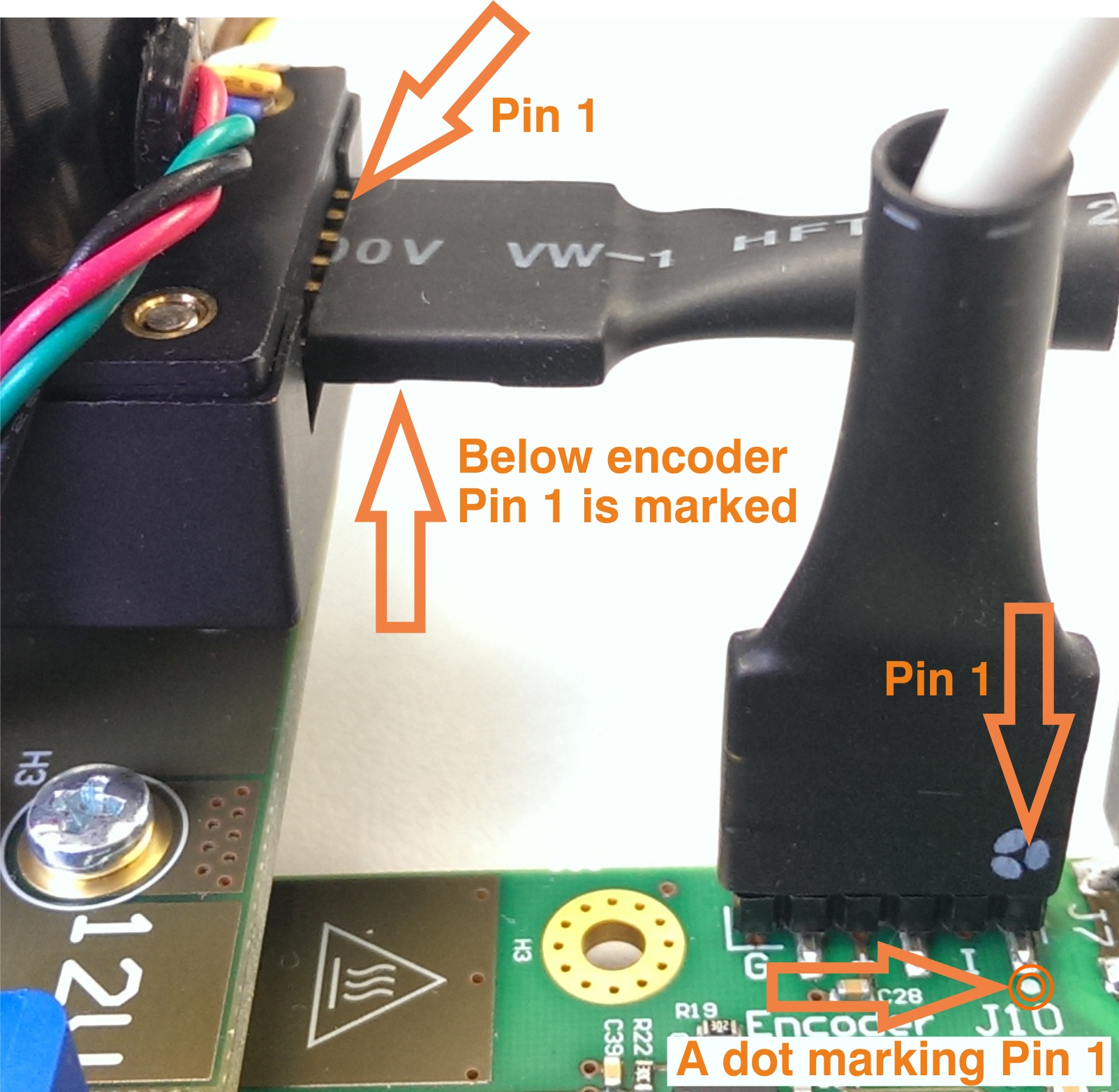 Pin 1 markings are indicated with the arrows, on the EDPS Board a white dot marks 6-pin Pmod header pin 1. This pin should be aligned to the Encoder Pin marked "G" and "1" visible when looking from the bottom up. Please note that Encoder header has 5 terminals while the driver board and Pmod cable have 6 terminals.

An overview of network configuration and some methods for network troubleshooting are given.

It is assumed that the operating system on the Host PC is Microsoft Windows 7 or newer. For other operating systems, the basic network principles are the same, but the means of configuration are different; consult the corresponding user guides.

Open the Control Panel and click on the Network and Sharing Center. The following window appears: 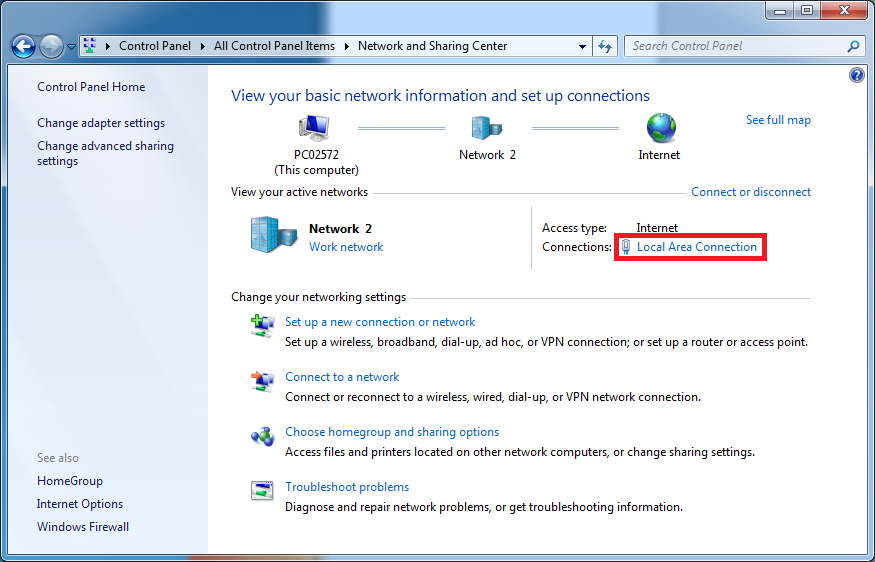 Figure 6: The Network and Sharing Centre, with the network connection used for communication with the Control Board highlighted. 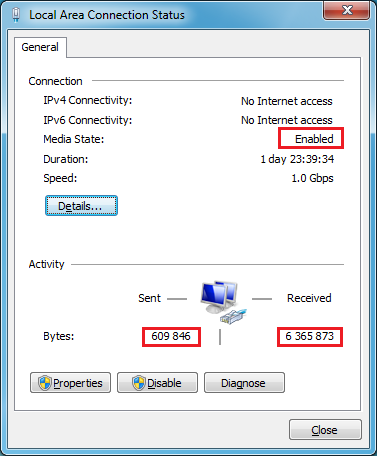 Figure 7: A network connection status dialog, with the media status and number of bytes sent and received highlighted.

For normal operation, the media state should read "Enabled".

During normal operation, the number of bytes sent and received should increase when there is network traffic, for example, when pinging the Control Board, when operating the Web UI, when pinging, etc.

Checking network connectivity to the Control Board

where IP is the IP address of the Control Board. The result should be similar to the one on the following figure (Figure 8): 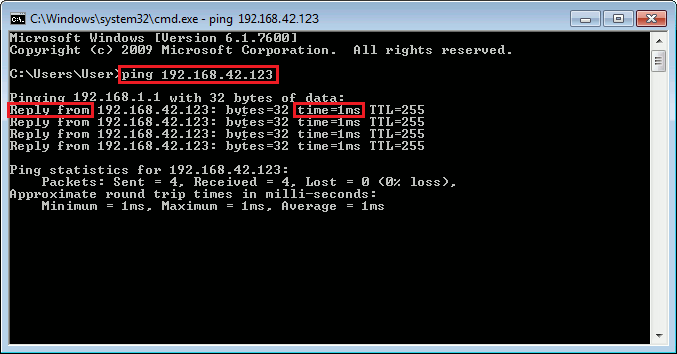 Figure 8: Successful check of network connectivity to the Control Board. The command entered by the user is highlighted, as are the important keywords that should be present in the output of the command "ping".

Note: After a recent change of network settings, it can happen that the ping is not successful because the changes haven't propagated to the other participiants on the network yet. It can be sometimes remedied by running the command "ping" on the other computer, in this case, on the Control Board, pinging the IP address of the Host PC. 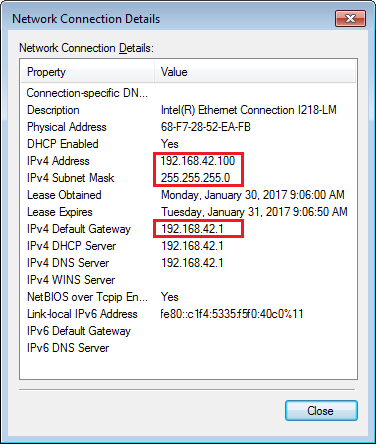 The network settings should be such that the Control Board is reachable from the Host PC. In the case when they are in the same network segment (gateway is not involved), the following conditions should hold:

On the example of settings shown on Figure 8 and the default configuration in the default firmware, the conditions are fulfilled as follows:

It will list all network connections and their associated IP addresses.

Changing the IP settings of a network connection 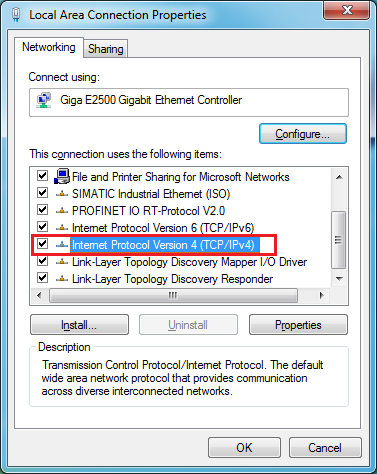 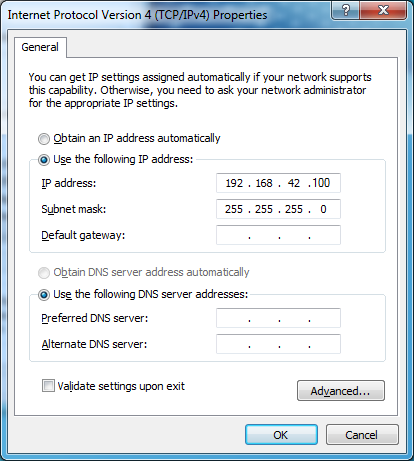 The settings on this dialog have to match the actual network settings.

In most network setups, settings are as follows:

In the case when using an network adapter dedicated solely for nothing else but communication with the Control Board, a static IP configuration (as shown on Figure 10) is to be used as follows:

Other cases are not considered here; consultation with network administration and/or appropriate handbooks is recommended. 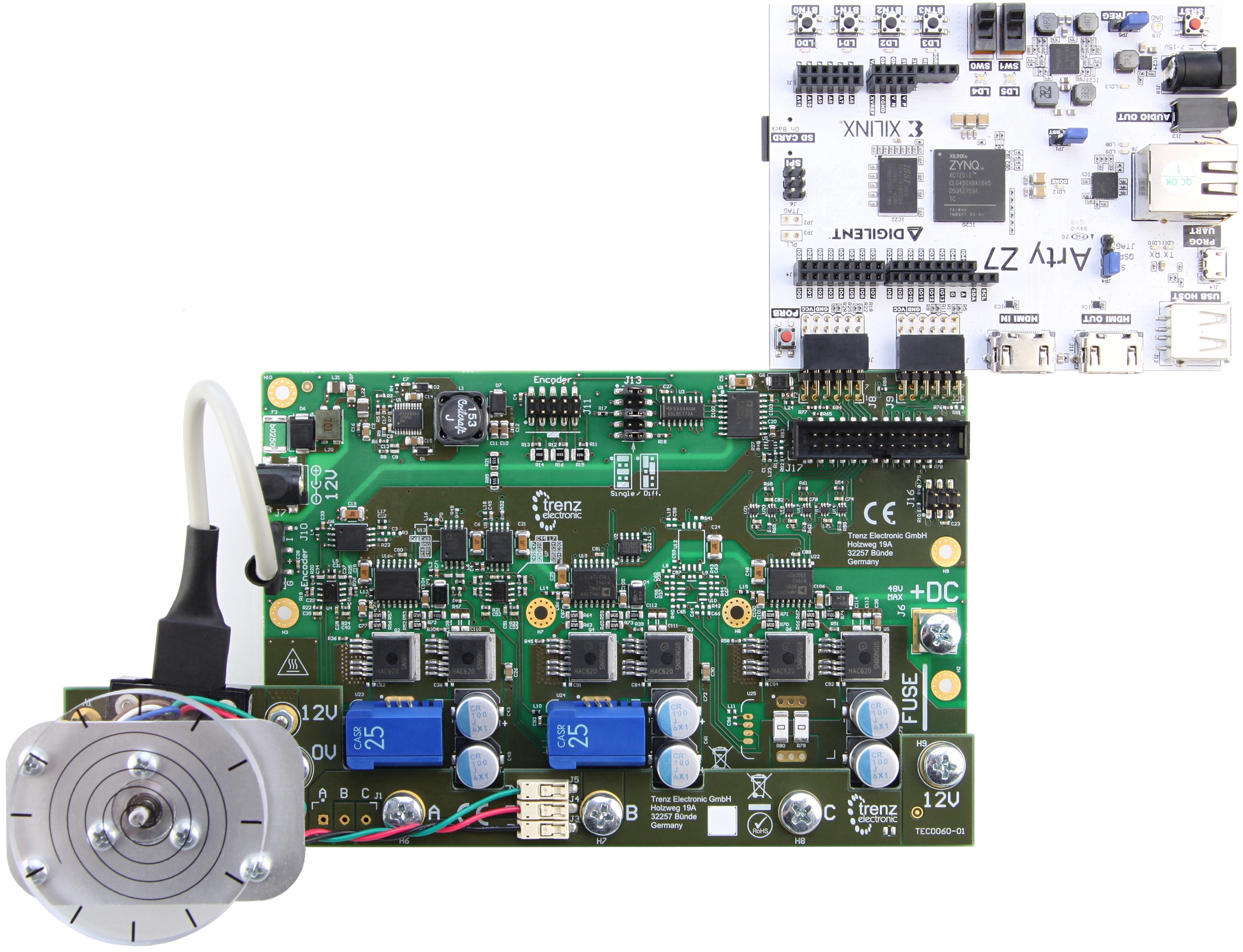 The Motor is pre-mounted to the EDPS Board using the Adapter Board and accessories.

The default Control Board is the Digilent ARTY-Z 7010, which is delivered as part of the EDDP Kit. This manual contains information relevent to the actual use of the ARTY-Z as a Control Board within the EDDP only; all technical data and user guides and manuals for the Controller Board are provided by the controller board manufacturer (Digilent Inc.). Use of the other Control boards with the EDPS Board is also outside the scope of this manual. Primary support for other control boards is currently provided by QDESYS.

The software delivered on the SD card configures the FPGA on the ARTY-Z board with the Field-Oriented Control algorithm and starts the web server to serve the Web UI.

In the case the boot message was not seen for any reason, the network configuration can be seen by logging in as "root" with the password "root" and executing the command "ifconfig" as shown on the following figure: 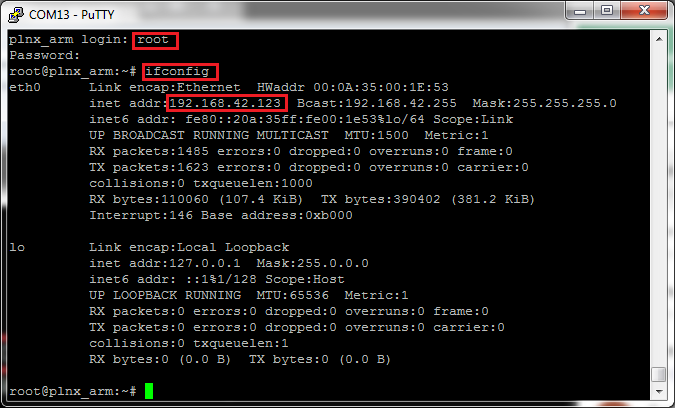 To access the EDDP Web UI, enter IP address of the Control Board to the web browser address field. The following page appears: 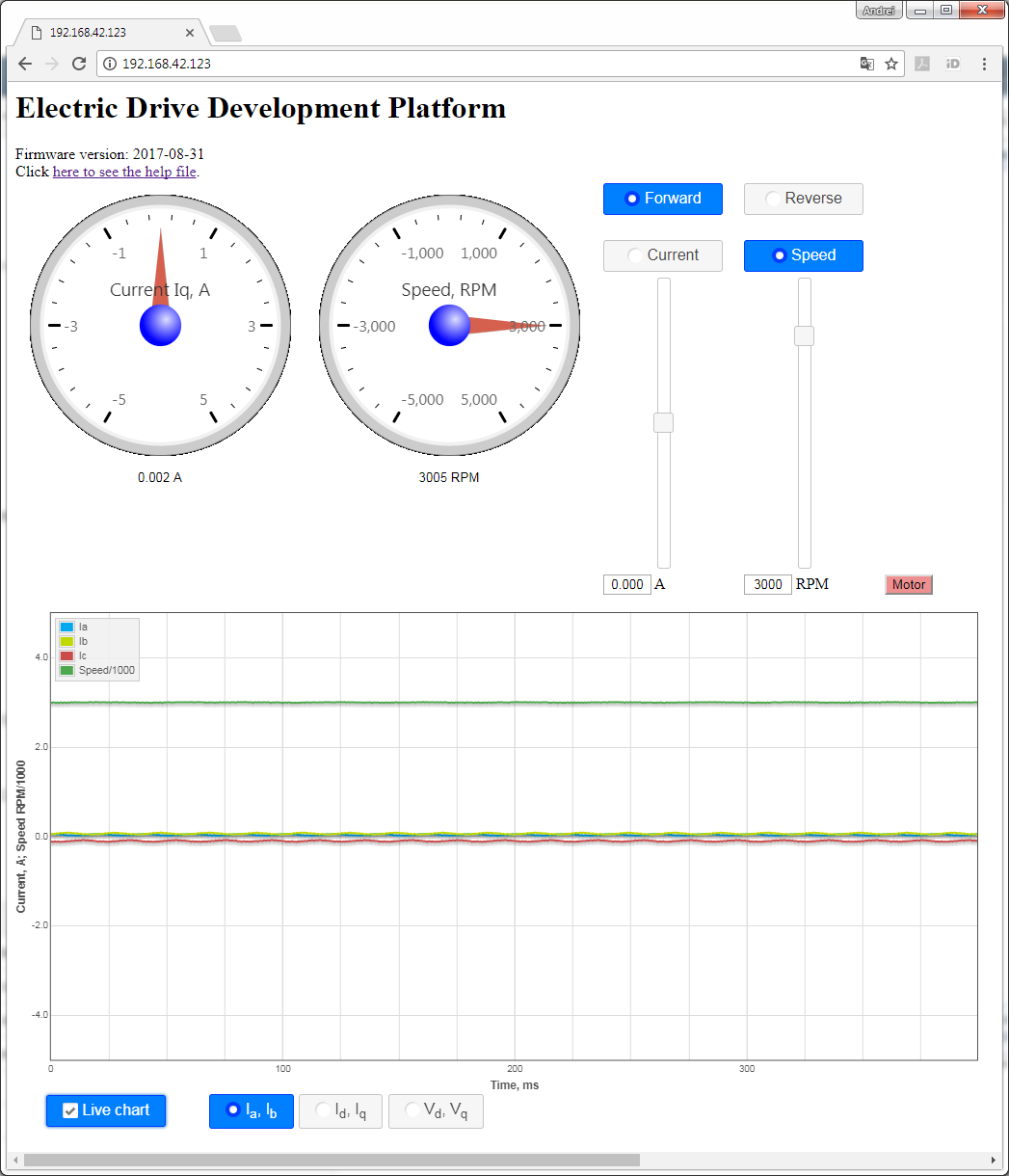 The gauges show the stator current Iq and the motor speed in RPM.

The sliders permit selecting the target speed and target current when in the appropriate mode. The direction radio buttons "Forward" and "Reverse" will be changed accordingly when the sign of the value is changed.

The radio buttons "Forward" and "Reverse" can be used to change the direction; the target slider will be changed accordingly.

A 3-phase permanent-magnet synchronous motor with attached encoder and mechanical load is mounted to a EDPS Board by using an Adapter Board. The EDPS Board is connected to a Control Board through PMOD connectors. A Host PC running a Web Browser connects to the Control Board through a Network.
On the EDPS Board, the 3-phase power stage drives the motor according to the PWM signal. The current transducers on the Driver Board transform the phase currents on 2 (optionally 3) phases into voltages, which, along with the DC Link voltage, are converted by ADC-s into a delta-sigma bitstream. The encoder signals and the sigma-delta bitstream are passed through the galvanic isolation to the Control Board. The PWM signal and ADC clock from the Control Board are passed through the galvanic isolation as well.
On the Control Board, the FPGA configuration is determined with the SDSoC Application built on top of the SDSoC Hardware Platform and the ARM Cortex-A9 CPU is running the Embedded Linux Code.
The SDSoC Hardware Platform provides a stream-oriented interface of the underlying hardware to the FOC algorithm. The streams are as follows:

The Embedded Linux Code, running on the ARM Cortex-A9 CPU consists of the following:

The Web UI running in a web browser on the Host PC enables use of the EDDP Kit from anywhere in the network. 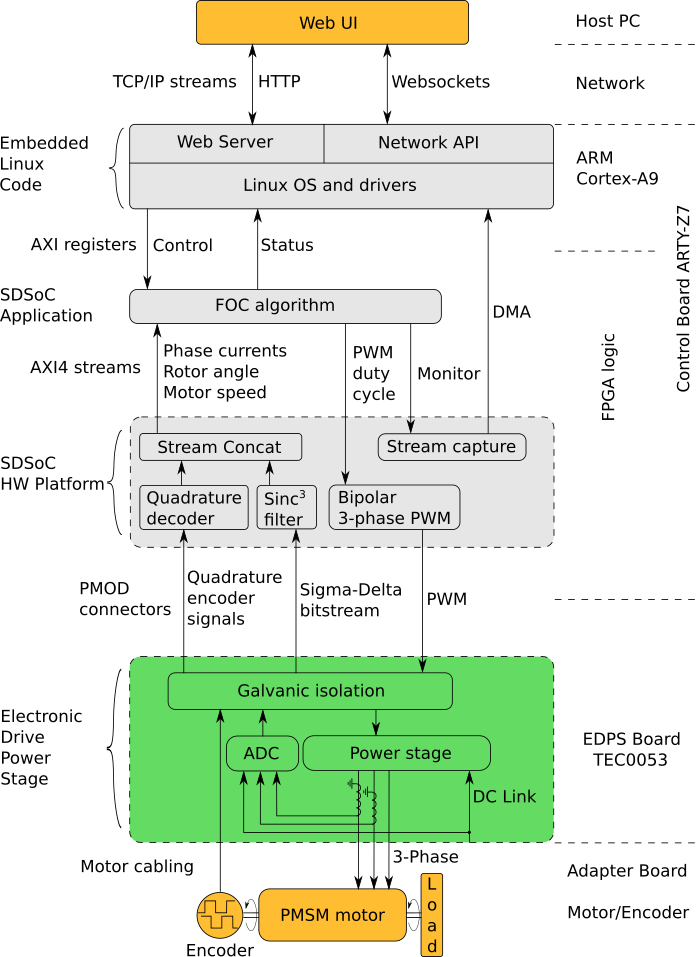 Figure 15: Block diagram of the EDDP.

An excerpt of the FPGA resource utilization by the FOC SDSoC Application Project is shown in the Table 2. The FPGA used on the Controller Board is Xilinx 7z010clg400-1.

The additional documents, listed in the Table 3,  can be downloaded from Trenz EDDP Web Hub:

All resource links for other relevant documents and websites are available from Trenz EDDP Web Hub:

The material contained in this document is provided “as is” and is subject to being changed at any time without notice. Trenz Electronic does not warrant the accuracy and completeness of the materials in this document. Further, to the maximum extent permitted by applicable law, Trenz Electronic disclaims all warranties, either express or implied, with regard to this document and any information contained herein, including but not limited to the implied warranties of merchantability, fitness for a particular purpose or non infringement of intellectual property. Trenz Electronic shall not be liable for errors or for incidental or consequential damages in connection with the furnishing, use, or performance of this document or of any information contained herein.

In no event will Trenz Electronic, its suppliers, or other third parties mentioned in this document be liable for any damages whatsoever (including, without limitation, those resulting from lost profits, lost data or business interruption) arising out of the use, inability to use, or the results of use of this document, any documents linked to this document, or the materials or information contained at any or all such documents. If your use of the materials or information from this document results in the need for servicing, repair or correction of equipment or data, you assume all costs thereof.

No part of this manual may be reproduced in any form or by any means (including electronic storage and retrieval or translation into a foreign language) without prior agreement and written consent from Trenz Electronic.

The hardware / firmware / software described in this document are furnished under a license and may be used /modified / copied only in accordance with the terms of such license.

To confront directly with the responsibility toward the environment, the global community and eventually also oneself. Such a resolution should be integral part not only of everybody's life. Also enterprises shall be conscious of their social responsibility and contribute to the preservation of our common living space. That is why Trenz Electronic invests in the protection of our Environment.

Trenz Electronic is a manufacturer and a distributor of electronic products. It is therefore a so called downstream user in the sense of REACH. The products we supply to you are solely non-chemical products (goods). Moreover and under normal and reasonably foreseeable circumstances of application, the goods supplied to you shall not release any substance. For that, Trenz Electronic is obliged to neither register nor to provide safety data sheet. According to present knowledge and to best of our knowledge, no SVHC (Substances of Very High Concern) on the Candidate List are contained in our products. Furthermore, we will immediately and unsolicited inform our customers in compliance with REACH - Article 33 if any substance present in our goods (above a concentration of 0,1 % weight by weight) will be classified as SVHC by the European Chemicals Agency (ECHA).

Trenz Electronic GmbH herewith declares that all its products are developed, manufactured and distributed RoHS compliant.

Information for users within the European Union in accordance with Directive 2002/96/EC of the European Parliament and of the Council of 27 January 2003 on waste electrical and electronic equipment (WEEE).