FPGA's and SoC can be used for many more advanced functions as making a LED to blink. However "LED Blinky" is considered a "Hello World" for systems that can not otherwise say Hello.

To make LED to Blink (under user control) following requirements are needed:

If any of those requirements are missing you may encounter problems with LED Blinky.

A timing source or Clock is required to make an LED Blink, without reference to time or known Clock source, we can only make LED to be permanently ON or OFF.

If we do not know how to access the time/clock source or if we are not sure if the clock is enabled and running we have an potential problem and we can not proceed to the LED Blinky unless we have identified an active/enabled accessible clock source we can use for timing.

If our goal is to make a LED to blink (from PL in Zynq Device), then the safest way is to use FPGA Configuration Master Clock this clock is always available and accessible in the same way, we do not need to know any specifics to the board we have and we do not depend on PS init done by FSBL.

This design blinks a LED connected to DONE pin and also a VIO Pin, on any Zynq MPSoC device, without using any clocks provided by the externally, and without the use of PS supplied clocks. LED Toggle rate is about 2 Hz.

It is very common that modern Integrated Circuits have separate power supply pins for I/O Voltage. That voltage if applied control the output levels from the device, if the Voltage is too low or missing then it is not possible to have enough current from the device I/O Pin to make a LED Lit.

FPGA and SoC SoM's can have fixed and user controlled Voltages for the I/O Banks. It is important to assure that the I/O Bank that controls the LED has a valid Supply Voltage applied.

NOTE: Missing VCCIO Voltage will not cause AXI GPIO to freeze, no matter if it is connected to MicroBlaze or Zynq Processing Block.
NOTE: Changing I/O Standard will not change the Bank Supply Voltage or enable it.

If there is on board LED directly connected to FPGA "DONE" output, then it is also possible to control it as long as it is possible to configure the FPGA (or PL portion of Zynq). For Zynq the PS subsystem is not needed if configuration is done via JTAG.

The good thing about Done LED is that if it is available it has fixed location, there is no need to assign it to some pin and it has fixed available power as well. The tricky parts is that DONE output is controlled by FPGA Primitive so the code to control the Done LED is different from that of normal PL I/O Controlled LED.

If there is a LED directly connected to lower MIO Bank of the Zynq then this LED is also always controllable, as this Bank has to be powered for the device to boot. This LED can also be controlled if the PL portion of the Zynq is not configured or even un-powered.

This is an option that is always available as long as we have JTAG Connection to the PL.

Example of VIO LED, the SoM being used is Kintex UltraScale TE0841, the LED is implemented in F32C Softcore Bootloader that is waiting for Arduino IDE to download a sketch. There is no limit for the number of virtual LED's. It is also possible to attach those VIO LED's to Zynq GPIO when using EMIO mulitplexing, so the same GUI would show LED's controlled by Zynq PS during boot or running Linux.

LED's on TE SoM's and Baseboards

F32C is an Open Source Soft Processor and SoC system that has ready to use support for Arduino IDE (using Arduino IDE package manager). More details on installation into Arduino IDE can be found here. F32C project is hosted at github f32c/f32c.

There is no need to have any Xilinx tools installed or any toolchain/compiler either.

F32C_demo availability - designs and prebuilt images ready to be used with Arduino IDE.

Those SoM's are not currently integrated into the F32C-Arduino package manager, to use them please configure FPGA first, then select Generic FPGA from Arduino IDE.

Vivado IPI Block Diagram for the f32c_demo. F32C is clocked at 100MHz, Memory configuration set to 128KByte or larger for all devices that have enough BRAM's, bit 0 of simple_out is connected to on-board LED. Optionally there may be FPGA debug IP Cores added, VIO and or ILA, in the example above is Logic Analyzer added on the UART (using UART_MON IP Core). Baud rate 115200. 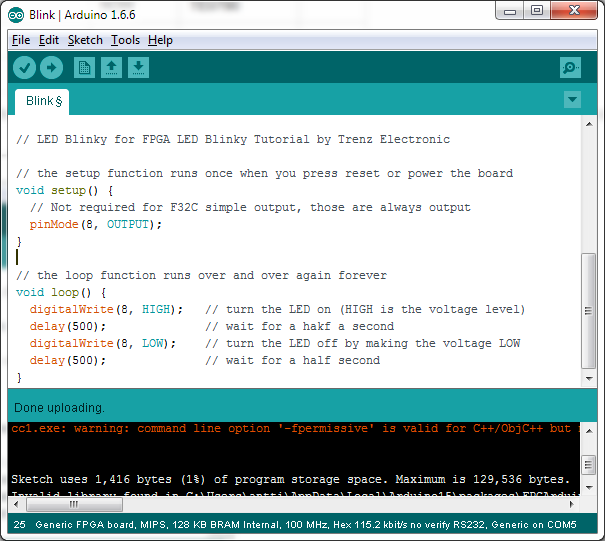 This is Arduino IDE screenshot after downloading LED Blinky sketch to F32C inside FPGA, selected generic FPGA board with 128K RAM and 100MHz Clock. After download the on-board LED on the FPGA/SoC SoM will blink.

If you are not sure to what pins the LED(s) are connected it is possible to create a "dummy" FPGA design with "UNUSED PIN PULLUP" option. If FPGA is loaded with bitfile then any LED that is connected in active high configuration will be on, if the I/O Bank is powered. The internal pullup current is sufficient to make most modern LED to be lit (not very bright).

If you know that there are LED's connected to FPGA and they do not get lit with "unused pin pullup" FPGA design, then most likely the I/O Bank with the LED's has no power.